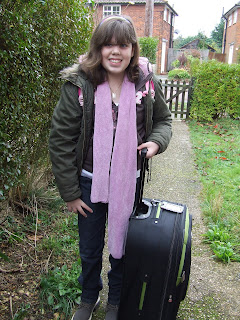 So this week it's Em's turn to be away.And to say Holly is missing her would be putting it mildly!They said a very teary farewell to each other before I took Holly to school this morning as I decided it was better to do it here than have them in floods of tears in the school playground.And this evening Holly cried herself to sleep ,bless her :( She is now fast asleep cuddling Em's favourite Big Monkey toy as he was a bit too big to go in her suitcase with her!I so hope they remain as fond of each other as they are now,when they grow older.
Looks like plans to see Anna tomorrow may be cancelled as Lilly is still off school but hopefully we'll be re-arranging it for later this week :)
Posted by suebaru at 1:51 PM

God... i feel for her you know. Tell her she has a thousand kisses from Singapore...

lilly is back at school, so friday si a definite!

ahhh bless....hope she has a wonderful time!!!
xoxoxo
annie