The weather has been gorgeous the last week...though yesterday I spent most of the hottest day of the year indoors scrapping!
On Friday night I started the weekend with a very civilised 'picnic in the park' with three friends ,whilst our daughters were at Brownies.We did consider the pub, but as all the outside seats would be taken up by the smokers and the football would probably be on inside(and it was far too nice to sit indoors),so we settled for a couple of drinks sitting out on the grass instead :) I supplied the drinks while another mum supplied the Pringles, grapes, & strawberries..all produced from her very lovely picnic basket complete with pink tablecloth.I wish I'd taken photos but they would probably have thought I was mad!If the weather's as good again this Friday evening we may do the same again!
Saturday I went to watch Holly's girls kwik cricket team take part in the Herts Youth Games.Considering they have only been practising few weeks,they did really well ,only losing their matches by a few runs.It was a beautiful hot day,and the perfect excuse to sit out in the sun and do nothng for four hours!
Yesterday was crop day,and I got almost three LO's done.Well, two completed but one needs the photo replacing after I managed to drop a very sticky journaling sticker on it!This one still needs the date adding, as the sheet of letter stickers I used didn't have numbers on it - really annoys me when that happens! 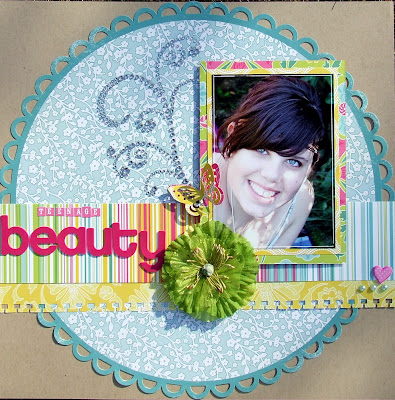 Ok, so not loads (yet!) ,but it's more than we managed a couple of years ago when we first tried growing them.I think then,we got about one ripe one that the birds and slugs didn't get to first.... 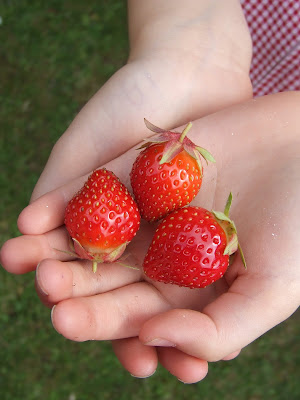 So far this year,we've picked three (I did warn you it wasn't loads!) and there are lots more that are nearly ready :) I never seem to be organised enough to have a whole veggie patch growing,so this year we have some potatoes in a tub as well as runner beans again.
I'm not sure how much of a success Holly's Brownie camp was ,to be honest :( She has become very 'anxious' about a couple of things over the last year or so,one of those things being, being away from home :( She gets herself really worked up ,eventually making herself ill.However, she did stay the night so that's something ,I was expecting a phone call to go and pick her up! She came home absolutely shattered and was out like a light on Sunday night.
The Maypole Dancing was as sweet as ever at the school fete, plus being a PTA run event,there is nothing to stop us taking photos :) (Wow, my photo editing is so professional!!) 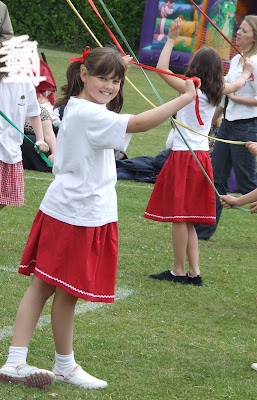 Monday evening Em hurt herself whist playing basketball with Holly in the garden.Turns out that she has a splintered a bone in one of the fingers of her left hand -ouch! It needs to kept strapped up for the next two weeks and then we need to return to the fracture clinic.
Yesterday we got a letter from her school ,telling us that she has been chosen to study for all three science GCSE's,starting in September (her school start theirs a year early) She's worked really hard for this so we are very proud of her :)
Yesterday was also Geoff's birthday,but he spent the morning in A&E with Em getting her hand looked at.This meant that our original plan of a trip to Ikea was cancelled (see, we really know how to party!).We did make it to Frankie & Benny's for tea though :) And as Geoff doesn't really eat birthday cake, I made some cupcakes for me & the girls, letting him blow the candle out :) 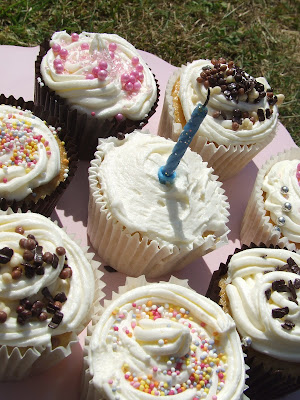 
Today Holly spent most the day doing this... 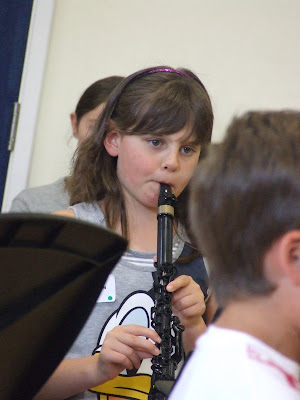 and ended it doing this! 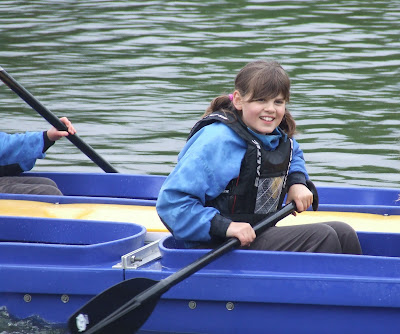 She spent the day at 'Wind Day' learning two pieces of music to perform at a concert for the parents in the afternoon. And then at Brownies this evening they went bell boating down at the lakes.Although she was adamant that there was no way she was going to jump into the lake at the end again,like she did last year, she changed her mind and did a spectacular High School Musical style jump off the jetty!Needless to say she needed a warm bath and a shampoo when we got home!

Tomorrow she is maypole dancing at the school fete before heading off to Brownie District camp for the night and all day Sunday.They get to do fab stuff like archery, zip wires and abseiling.it wasn't like that in my day! And poor Em gets to spend her weekend doing homework and revising :(

I keep saying I'll do some scrapping soon, but somehow I don't think it's going to happen til the crop next week!

..has whizzed by,oops!I did make a point of being a bit lazy at the beginning of the week by doing nothing but the bare essentials!
Holly started at a girls cricket club this week and has been roped in to play at a match in a couple of weeks ,she's also halfway through a golf course at school:) She is a busy bee at the moment as she is also practising for a Country Dancing festival in a couple of weeks,as well as dancing at the school fete this coming weekend.I;m not surprised she's tired at night!
This weekensd I am lucky enough to be back on Pencil Lines and Anna had some gorgeous sponsorship from My Little Shoebox :) I love these papers :) I cut out the doors, and the door handle is a self adhesive pearl :)I also used one of the *ahem* few Disney gift cards that I picked up (literally!) whilst we were on holiday.Monsters Inc is one of my favourite Disney films :) I have now filled in the date details on the journalling die cut !) 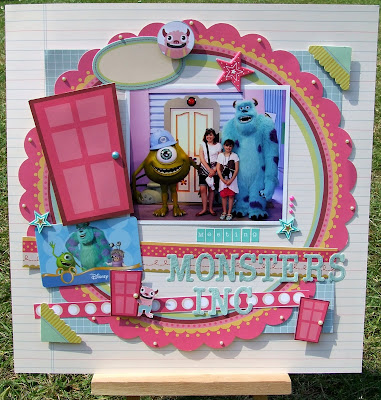 Today I have been helping Anna at the last Scrapping Angels retreat :) My feet ache and my purse is little lighter,but it was worth it :) I'm tempted to back through my photos and find pictures of us from the last five years,but that might be a little scary!
Geoff has been decorating the hallway since Friday and I arrived home this evening to find that he had managed to sand down our rubbishy hand rail back to plain wood, and it looks fab :)
I am off to rest my feet :)
Posted by suebaru at 1:27 PM No comments:

Much as I would love to be scrapping at the moment,I haven't had much chance.So here's a sneak of one for Pencil Lines next week,just to prove I do still do it! 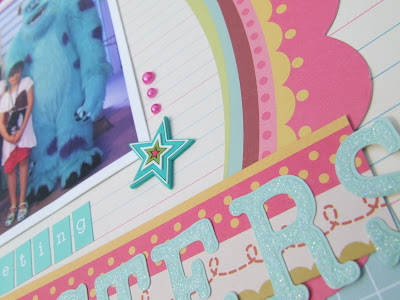 Yesterday we had a bit of a farewell.I know there some people who think I'm absolutely barking about this,but we finally gave away the girls play kitchen and I am really sad :( !! It was Em's 'big' birthday pressie when she was 2,so it's been with us a while ,with lots of happy hours spent playing with it(the girls you understand, not me!) 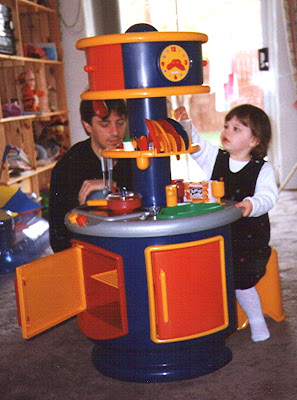 Sadly,we just don't have room in the house for it any more and it's spent the last couple of years feeling neglected in the shed,making brief appearances in the garden during warm school holidays.Luckily we have found a good home for it and Holly should still get a chance to play with it now and again .To me, it just kind of symbolises a end to part of my girls childhood,those days happily spent playing imaginary cafes with a wonderful menu of plastic chips! That said we still have a big box of plastic food which does still get played with now and then - long may it last!

Thankfully it's a bit cooler here today, though the rain meant we dashed indoors for the last five minutes of our BBQ last night! I am looking forward to having a few minutes peace & quiet to myself at some point this week :)
Posted by suebaru at 5:16 AM 2 comments:

Having had a dodgy modem and then managing to get a virus on the PC,I had an enforced break from blogging.And the longer I left it, the less I remembered to come back !
Last weekend we went to Thurrock as Em had some money to spend and wanted to go to Build A Bear.She came home with this sweet little friend. 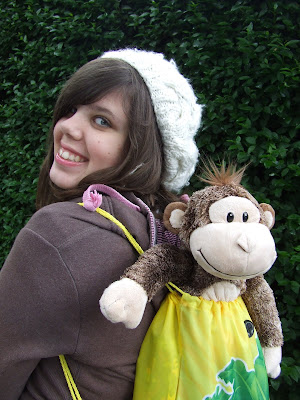 I got some new things too :) 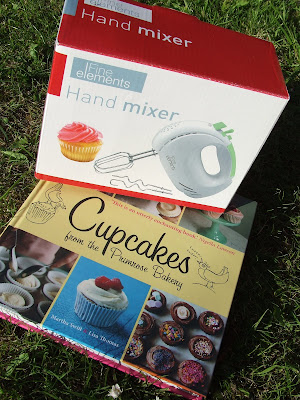 Last weekend saw me attempting ( and almost failing!) to be a domestic goddess by making cookies and lemon loaf from my Humming Bird Bakery book.Let's just say that cleaning the oven after the lemon loaf mixture dripped every where was not my idea of fun!
Half term seems to have whizzed by and luckily the weather has been beautiful since Tuesday.Holly has been on a Brownie trip to London,going to the House of Lords and the London Eye - I think most of the mum's wanted to go too!She came home very tired but managed to stay up late playing on Rock Band with her Aunty Sylv and Uncle Pete who were visiting for a couple of days :)Em spent the morning at mum & dad's and made a banana loaf cake from the Humming Bird book again,as well as with making the icing.Although it was supposed to be Aunty Sylv's birthday cake she was very reluctant to let her actually take any home with her!
Today Em has been out with her friend all day and then off to a sleep over.In turn Holly has had her best friend over and they are camped out in Em's room for the night :) They've been in the paddling pool, painted, read their Brownie handbook (sweet!) and finished the evening watching Disneys Peter Pan in bed :)Tomorrow they have plans to make bisciuts and photo frames :) 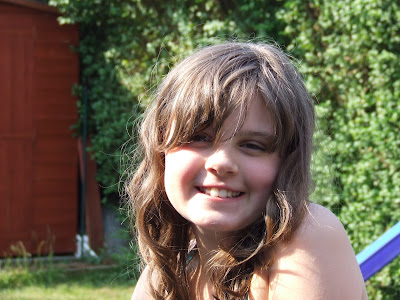 I have actually done a bit of scrapping,though I can't show it as it's for Pencil Lines next week :) I have speny ages ordering loads of holiday photos so who knows,I might start scrapping some of those soon...! I have to admit that I am still missing Florida even though we've been back just over a month now :( I am still missing cheesecake,the Disney Parks and that huge villa.Plus I'm on my last huge bag of Reeses's Pieces....:( !!
Posted by suebaru at 1:55 PM 2 comments: