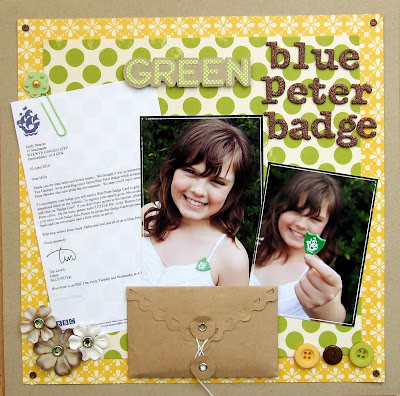 This LO is the one that had a title I wasn't happy with.I may have loads of alphabets, but I couldn't think of any that would match the green in this LO, until I got home and remembered the lovely green spotty October Afternoon ones.There is a full size copy of the letter inside the Maya Road envelope,and the papers are October Afternoon.The green paper clip is one from a cute set I found in WHSmiths,I just stick some pearls on it.Anyway, I am really pleased with this now it's all done :)
At this very moment,the sun is shining and I'm hoping the weekend is full of more sunshine:) WE have loads to do around the house and graden, but if the weather stays nice, I'm opting to stay in the garden! I did make a start on Holly's room but as I wasn't feeling well that day I sort of gave up half way through and threw everything back where it came from :( I did whittle her wardrobe down from being full to half though ,which is a start!
Our PC is going on a major go-slow at the moment so I may blog even less than usual as it takes so long to do anything!
Posted by suebaru at 4:58 AM 5 comments:

A couple of layouts :)

Yesterday was crop day, and after faffing about with a Disney layout for ages, I gave up and actually got some scrapping done :)This Lo is one I did at the last crop, but still needed a title so I took it with me and made sure I finished it this time! 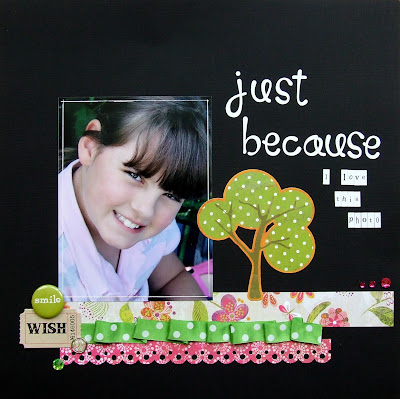 And this second one is done using some lovely Colourbox papers & die cuts and bobble trim that I bought from J0-Ann's whilst we were on holiday :) The butterfly & star were from a bargain set from embellishments in the kids dept in Michaels.I also managed to use up yet another of those very old KI memories Ice Candy word tiles 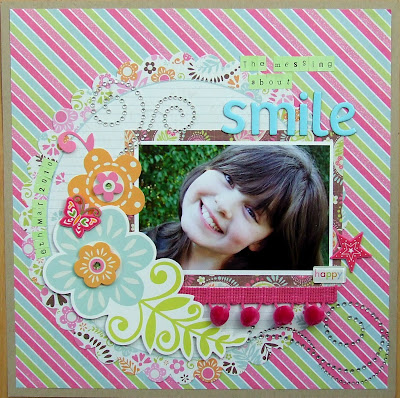 I did do a couple of other LO's, but one needs something else on it,and I'm not happy with the title on the other one, so they need fixing before I class them as finished :)
I feel like I have spent the last week constantly ironing,and guess what...the ironing bin is still full! Tomorrow sees me venturing into Holly's room to try & and have a clear out and a tidy up.I may be gone some time...!!
Posted by suebaru at 6:50 AM 5 comments:

I've spent most of today doing really boring jobs that have been building up and put off for ages,like sorting out that big heap of 'stuff' at the end of the bed and sorting out the shoe rack - deep joy! Along with some hoovering,lots of washing and some paper shredding it's been one of those days...
But I did stop for five minutes to stick a title on this LO that I did at the crop in March.I used Basic Grey Green at Heart papers,stickers & ribbon doilies and Doodlebug letter stickers. 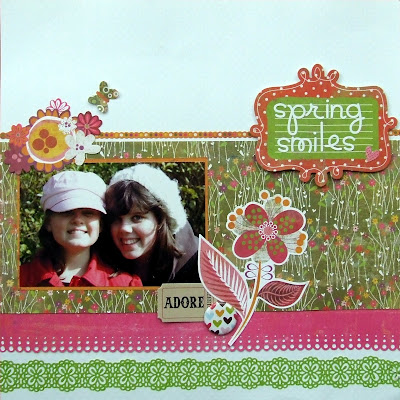 Before we went on holiday, I had noticed lots of 'things' sprouting up in the garden.Upon our return, bearing in mind we were gone nearly a month, we have a crop of conker trees growing all over the place!All courtesy of the cheeky squirrel who spent ages burying the girls conkers in various pots and mud patches last Autumn! I know they will take absolutely years to grow,but I'm not sure where to grow them 'safely' as the garden isn't that big compared to the size of a full grown conker tree! 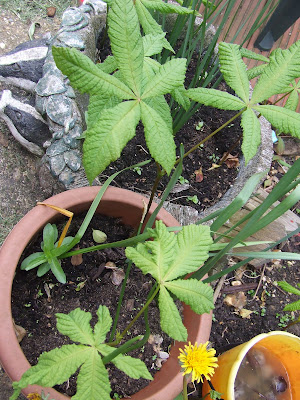 So the last week has been a bit glum really :( I guess it is just post holiday blues,coupled with snotty school letters and various other stuff.And the miserable weather really doesn't help much.The girls went out in the garden this afternoon...wearing winter coats and mittens -it's May for goodness sake!!

I also manged to give myself a DIY trout pout on Tuesday - not a good look I can assure you! I reached up to get something from the high shelf in the bathroom and a full bottle of shampoo fell off and smacked me in the mouthmcutting my top lip on my front teeth.I will admit to swearing in a very high pitched voice before crying! Not for long though as I had five minutes before I needed to leave and pick Holly up from school.The first couple of days were the worst, I really did look like I'd been punched in the mouth,and I still have a delightful purple top lip - nice!

I feel like I should do some sort or re-cap on the holiday, but I don't really want to bore everyone!So I will doa few photos here & there :)

The higlight of the trip for Holly was meeting Mickey, while for Em it was probably being so close (and yet so far!) to seeing the Harry Potter part of Universal Studios. 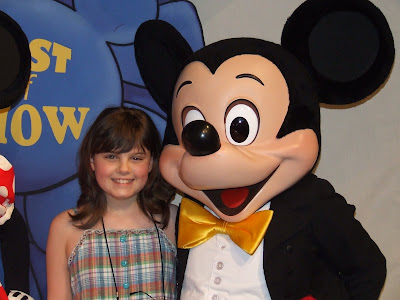 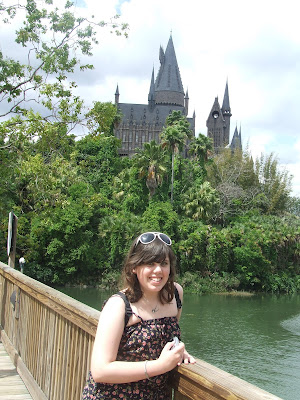 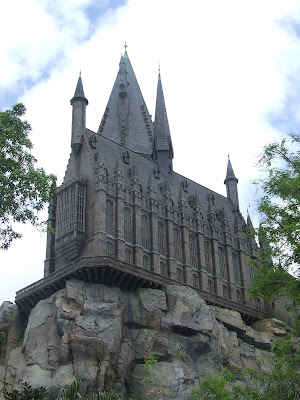 I put away the new scrapping stuff that I bought in the US today...ok, that's a lie,I just sort of shoved most of it in to any gap I could find! I have no idea where to start with scrapping the holiday to be honest, although I have bought quite a lot of nice Disney/Mickey stuff already.I am cropping this weekend so I need to sort myself something to whilst there, so I may have some scrapping to share soon :)
Posted by suebaru at 2:14 PM 2 comments:

Yes, I was among those people who went on holiday for 14 days and ended up staying for a further 11 !!

Not that I am complaining! We looked on the bright side and saw it as an oppurtunity to have an almost month long holiday, which we would never had under normal circumstances :) After the mad dashing around of parks we did in the first planned two weels, it was good to have a rest during the extra days! 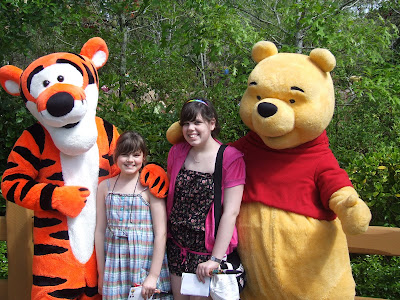 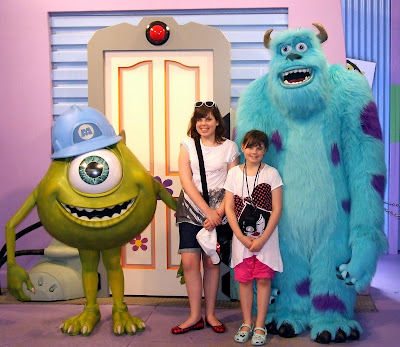 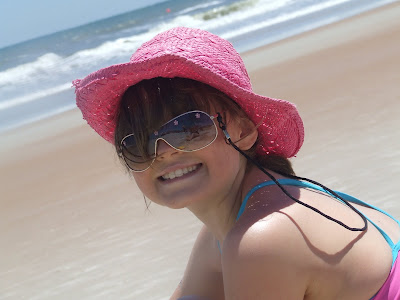 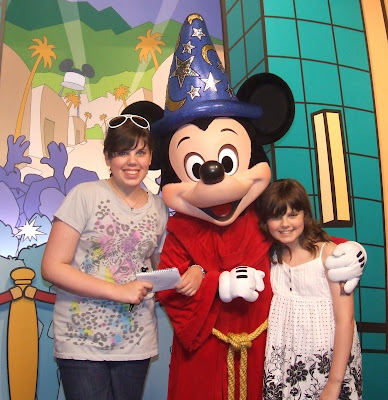 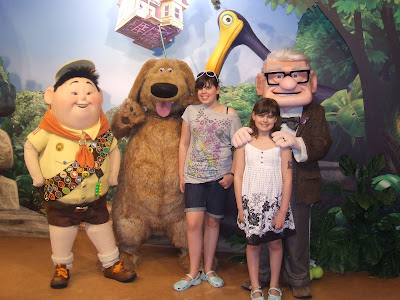 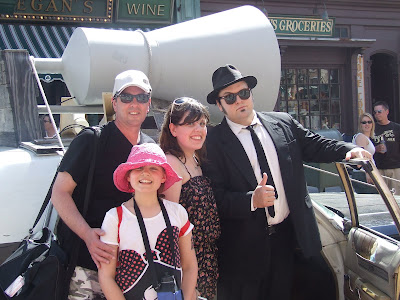 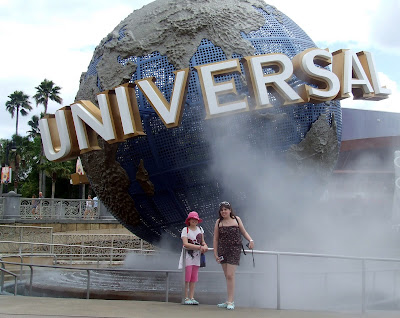 Tomorrow sees life returning to normal,I'm just hoping we can drag ourselves out of bed in the morning!