This weekend just gone we had a bit of a move around in our room :) Last week our new sale gargain bed was delivered so on Sunday afternoon Geoff dismantled the old one and put the new one together :) We also decided to move things around so the bed is now up against a wall instead of under the window and it makes the room look so much better :) We have also decided to wallpaper one wall with some very gorgeous wallpaper,a joint decision made surprisingly quickly for us! :) Picture wise it is proving more difficult to find what I really want :( Many moons ago when I first left home, I had some gorgeous Norman Parkinson posters in my flat.I still have those posters but they are pretty creased and damaged after 20 years...can I replace them?!It's not looking likely at the moment :( I am going to try the Covent Garden Poster shop as I am pretty sure I got at least one of them from there .If I have no joy we'll have to find something else :( (But I'm still not chucking out my posters !!)

On Saturday Holly and I made meatballs for the first time :) For some reason Holly was convinced she didn't like them though I thought if she helped make them she'd know there was nothing in them she didn't like! I think her favourite bit was smashing up the cream crackers! This weekend we'll be making meatloaf (can you guess we're using a Jamie Oliver book?!) 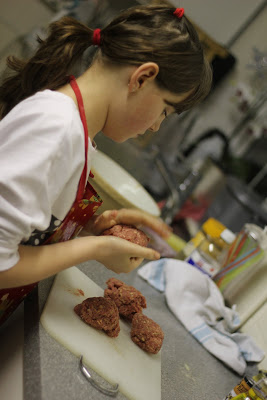 Eoday we have been to Ikea to get a couple of things for around the house:) Sadly though I couldn't bet one of the main things I needed though, new bulbs for my Stranne lamp :( 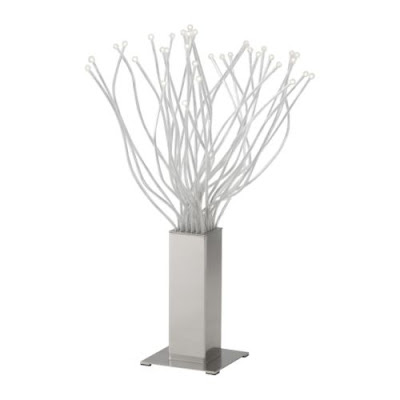 Apparently they have updated the design so that they now use LED's. And they don't sell the replacement bulbs to go in my 'old' version :( Not happy and I think I will write and complain as once the rest of my bulbs blow my lamp will be useless :(
Posted by suebaru at 2:23 PM 3 comments:

At the weekend we set about doing one of my 'aims' for this year and that was using things! I have had a Crock Pot slow cooker sitting out in the kitchen for the past year,new in its box.So on Sunday I made a sausage casserole.It did actually taste ok, though I think I will teak the recipe a bit next time.I am really not keen on tinned/chopped tomatoes so I will probably swap them for some tomato puree and add a bit more stock.The girls ate it though which is the main thing ! (Though Holly did leave the 'bits' like the pepper and mushrooms!)
Next thing to use was my new mixer that we got for Christmas.What is it with me and mixers? This one still doesn't seem to know the meaning of low speed and I still ended up with a cloud of flour and icing suger in the kitchen!Anyway, I made Hazelnut & Chocolate cupcakes from the Hummingbird Bakery book(bang goes any attempt at healthy eating!)They are lovely but even I found the combination of the filling (a dollop of Nutella type spread - we used Asda's own)and the frosting (flavoured with the choc/hazelnut spread) a bit too sickly and that is saying something! 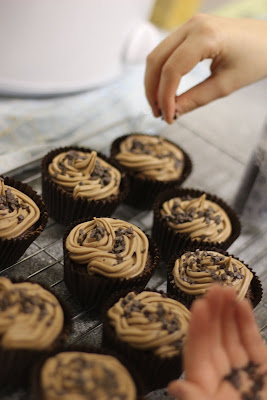 I am still taking a photo a day, though most of them are pretty random and not really worth sharing on here!
To help with my aim of doing Document 2011 I have gone out and bought myself a diary and am making notes each day :) I haven't kept a diary in years ,but as it's small enough to keep in my handbag and won't be hidden in a drawer by my bed I'm hoping I will make use of it!

I'll leave you with this photo of the gorgeous sky yesterday morning :) 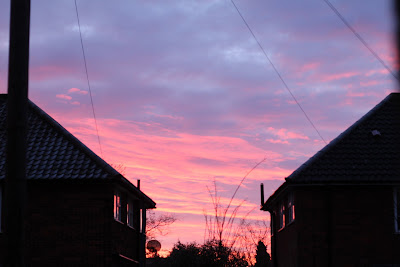 I am just waiting for the bread maker to finish so I thought I'd do a quick late night post!


There are so many photo challenges etc that seem to pop up at this time of year that it's hard to ignore them! I haven't actually told myself that I'm doing any of them, but I thought I would try and use my camera a bit more! I so much prefer indoor photos now that I've learnt a bit more about my camera settings (I still have a looong way to go but at least I've almost lost the flash!) so I have been taking a few snaps of the girls in the evenings.Here are a couple from the last couple of nights :)
Em in between dances on Just Dance 2 last night 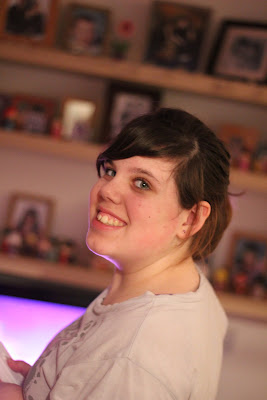 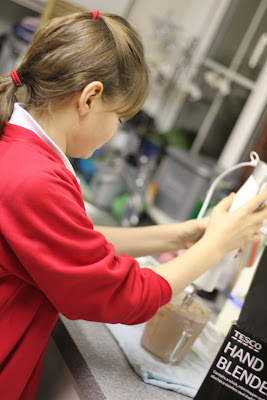 My bread maker is beeping so I am off to bed now it's finished :)
Posted by suebaru at 3:26 PM 1 comment:

Loved this weeks sketch so I made sure I joined in at Pencil Lines this week :) I used some lovely Echo Park papers from the Winter Time range.Although we did eventually have a huge snowfall we sadly didn't go out in it much :( This photo was taken when we went out for a walk to enjoy the last day of a fairly decent amount lying around (although the sledging mound was pretty much just a mud slide!) 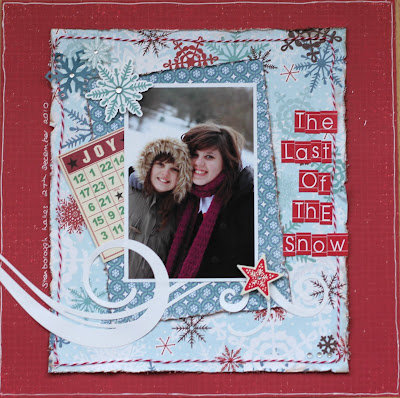 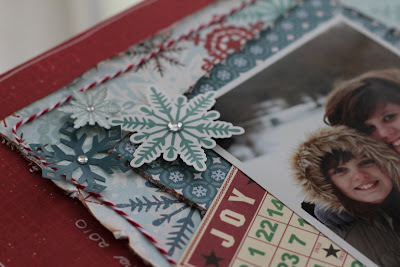 A lot of my scrapping stuff is a bit all over the place at the moment as we had some work done in the kitchen before Christmas and I had to empty my stuff out completely.I have started going through and getting rid of a lot of things that I am unlikely to use :) I also use up quite a bit of paper in the run up to Christmas making calendars for presents,which has helped :)
Today we took the tree and all the decorations down.It was good to have a tidy up but it does look a bit empty in the bay window where the tree was :( We are thinking of getting a bean bag for the girls and maybe a floor lamp to make it look a bit better.For some reason I always take a photot of the tree baubles when they are piled up waiting to be put away! 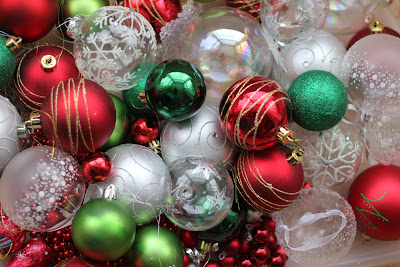 We found a couple of bargains in Asda this morning:) I got a gorgeous sequinned bag for Christmas in black ,they had both colours marked down to half price today so I treated myself to the silver version and we found some half price Minnie Mouse pj's for Holly :)

I have decided to do a document 2011 album this year.I didn't follow the class/prompts at all last year but have seen some fab pages on other peoples blogs (mainly Lauras !) so I am going to try this year :) I have my divided page protectors on order and if all else fails, I can do my pages at Anna's crop :)

So having been told off for my sad post yesterday, I thought I'd better come back soon with a more cheerful one!
This is the small mini album I made a a little while back.I used a chipboard Papermania album (£2.99 in The Range )It came with bookrings but was of them was too loose and kept coming undone so I swapped them for ribbon.The whole thing is very,very simple! I bought lots of Disney stash when I came home fronm Florida in a great half price sale and used a couple of packs of it on this :)The spotty papers are Jillibean Soup and the alphabet stickers are from October Afternoon. 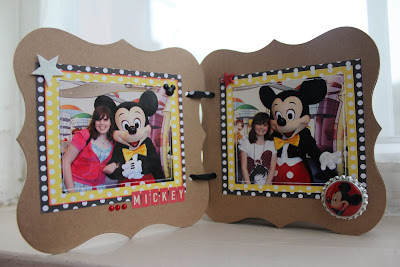 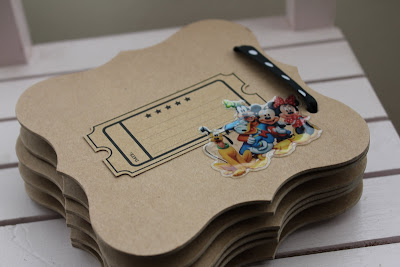 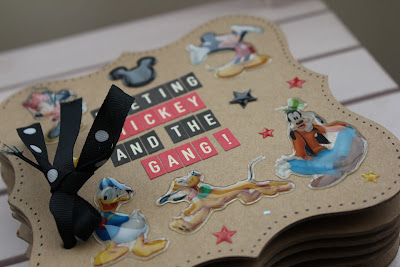 I won't bore you with all the pages, as the layout is the same on each one , character name in stickers and a bottle cap along with either a Mickey head icon or stars.The album was just the right size to do pages of both girls with all the characters they met at Epcot's Character spot :) I'm still not 100% sure about those epoxy stickers but I think they do the job ok :)
I hope you've had a good start to the New Year :) We went out this morning and I got a few bits from Hobbycraft :)We have also ordered a new bed which force me to do a major tidy up under our current one! Tomorrow the tree and decs will be coming down and we are going out to look for beanbags.Yes, it's all go here ....!!
Posted by suebaru at 10:38 AM 1 comment: