I love this photo of Em,it's another one taken by Anna:) Em turns 16 in a couple of weeks time...now that's a scary thought! Considering she was the most 'do I have to?' out of all us ,when I told her we were having our photos's done,she spent the longest in front of the camera ! Anna spent ages with her trying her various poses and listening to all Em's ideas about what she wanted to try.I really can't wait to see the rest of the images :) 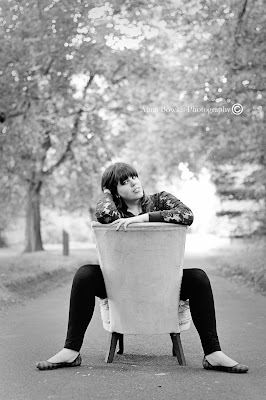 There seem to be lots of shows closing soon or have closed recently in London,hence our recent trips to see a 'few' shows :) One of those is Ghost the Musical which Em was really keen to see,me not quite so keen! For the cheapest tickets without sitting in the gods we opted for day seats.So yesterday morning I caught the first off peak train and headed to the box office in the hope they would have something left! We got seats in row B in the stalls,which in hindsight probably were too close to really appreciate the effects of the show but did mean that Em was in complete awe when the actors came right to the edge of the stage!Em absolutely loved it and to be honest I just liked it.I think it's probably because I'm so familiar with the film.I'm glad I went though (and I'm trying to ignore the thought that I could have bought a day seat for Wicked instead ;)!) Afterwards we did stage door and got our programmes signed and Em got her photo with the two main leads :) 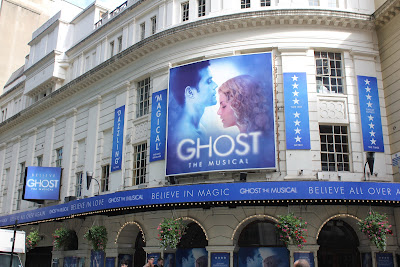 As there was not much point me coming home again after buying the tickets I had the rest of the day to wander around :) I think I walked miles! This year I have really learnt my way round parts of London,if the underground ever breaks down,I should be fine!I went to Oxford Circus,Marble Arch,Victoria,Buckingham Palace,Leicester Square,Covent Garden,Westminster,Trafalger Square...I think that;s it! 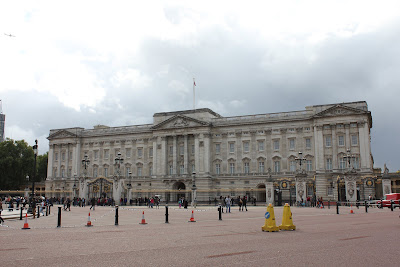 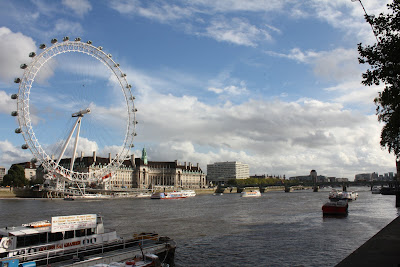 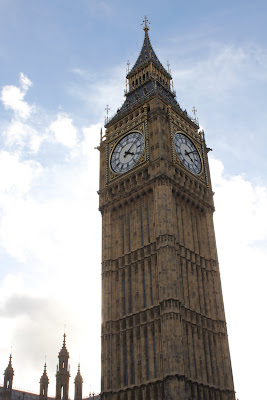 I had a really nice day just mooching around at my own pace :) That is it theatre wise now until the end of October :)

As mentioned in another blog post ,Holly made my cake this year :) 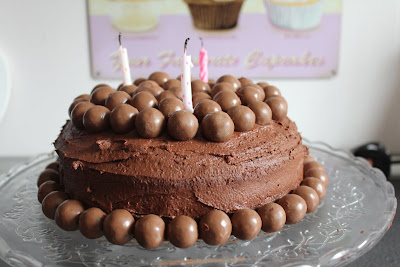 The Lorraine Pascal version was completely covered in Maltesers,but this was just the right amount :)
In August Holly also made a cake for her friend Tom :) When we went away to Cromer we found a lovely cake shop which was like an Aladdin's cave to her! We got two packs of ready coloured fondant icing as she already knew then what she wanted to do,and this was the end result :) 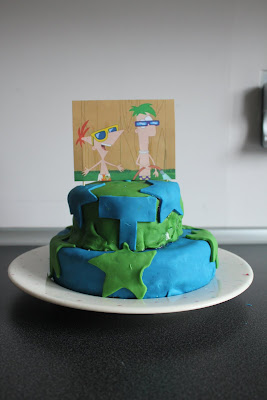 Blood Brothers was so good on Friday,we both cried our eyes out! The seats were fab too, seven rows from the stage :) The cast were amazing ,if you can get to see it before it closes in November - go!! 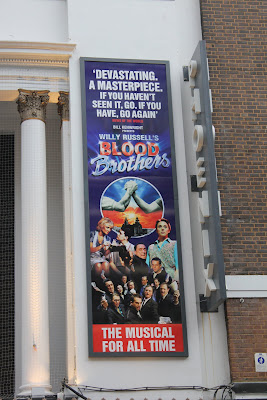 This is another photo taken by Anna on Sunday :) I am so happy with the sneaks she has shown us so far,I am so looking forward to seeing them all! 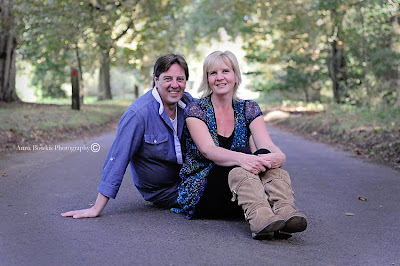 I love how this one looks so natural especially as I am far happier behind a camera rather than in front of it :)
This week Em had been given her Leading Prefect's badge,and Holly won an award in Food Technology,Chef of the week,for her fruit salad she made on Monday :)And I need to take photos before I forget!

This Sunday I booked Anna (best friend and owner of Anna Bowkis Photography) to come over and take some family/individual photos of us all - yes,that meant some with me in too!Although we have had studio family portraits done,I really loved the idea of an outdoor set of photos and have spent many an hour admiring such images on the internet!As Autumn is my favourite season ,now seemed the perfect time to book Anna :) Although the weather was bit dodgy earlier in the day,by the afternoon it was perfect :)We took Anna's advice and tried to dress in fairly co-ordinating colours :) We all really enjoyed the afternoon (yes,even those of us who are not so comfortable in front of the camera).Anna was fab a putting us at ease and I am so looking forward to seeing the results .Here's one she shared earlier :) 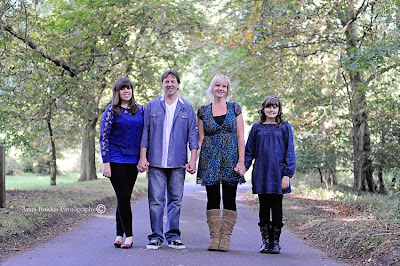 In other news,yesterday was my birthday and today is our 19th wedding anniversary :) Geoff and I both took yesterday off work and had lunch out - a rare event for just the two of us!My main present was going to see Wicked again last Thursday,it did not disappoint and was absolutely amazing.Trouble is, I come out of the theatre and want to go straight back and see it again! This Friday I am going to see Blood Brothers with Em,my birthday present from her :)Holly made me a lovely cake for yesterday, inspired by Lorraine Pascale,chocolate sponge,decorated with butter cream and Maltesers :)

...something happens and it makes you stop and think. On Wednesday I was shocked when I logged on to UKS to read that Kimmy Sonksen had passed away .Although I never met Kimmy in person ,she was an original member of the Pencil Lines team when we first started and was a huge influence on many people in the scrapbooking and card making world. It makes you realise just how precious life is and how quickly it can be snatched away. I can't even begin to imagine what her family must be going through at this time.
If you would like to make a donation in memory of Kimmy, a Just Giving page has been set up HERE in her memory.
Posted by suebaru at 5:33 AM 1 comment:

Today Holly started a her new senior school :) It was a bit of a strange day...once she'd gone ,part of me wanted to run and sob into my pillow while the other half me was like 'oh, that wasn't too bad actually'! Considering how anxious and worked up she used to make herself a couple of years back,she did so well today.She had a few tears and butterflies but soon got her happy face back on,and happily went off down the road with her friends and one their older sisters.Em is doing work experience this week at her and Holly's old junior school so they are going in opposite directions this week! Once I came back from work I hoovered the house from top to bottom,cleaned & tidied and then started to clock watch until Holly arrived home! She is shattered but had a good day :) I'm feeling slightly redundant in that I no longer have a school run/walk to do any more! 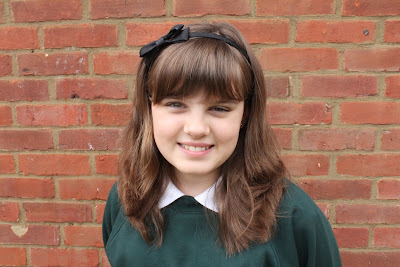 My little girl is growing up too fast :)
Em enjoyed her first day of work experience,which is good as she was a bit worried about it! She had booked to do it at a local ballet school (the closest thing available to something theatrical!)but it turned out that they don't start back til next week ,and she has to do her work experience this week :( Today she was with year 6 and her teacher from when she was in that year and had a really good day :) Let's hope the rest of the week is as much fun!
Starting to get slightly excited now about seeing Wicked again on Thursday :D :D :D

All too quickly the holidays are nearly over :( I wish we could have done more as due to Geoff's back we haven't done our usual bowling,shopping trips or family London trip this year :(
On Wednesday last night we had a very wet and cold day at Whipsnade Zoo :( I think it was the worst weather we've ever been there in! Typically the rain went off around the time we headed home :( I think it's the first time we have seen all the lions together like this though! 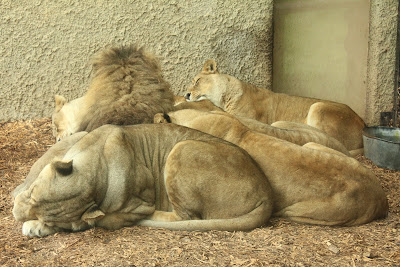 On Thursday afternoon Anna and the girls came over,just squeezing in a visit before the holidays finished! The weather was much better than the last few tomes they've been over so we went for a walk to the fun fair at the lakes :) All four went on the Dodgems which was hilarious to watch! Whilst Izzy and Holly screamed and laughed their heads off the entire ride,poor Em looked terrified! 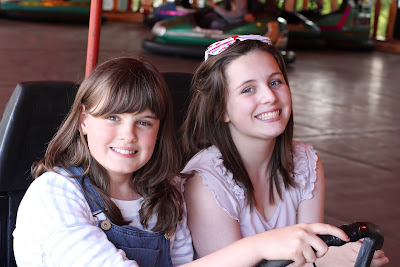 Can't quite believe these two start senior school this week!