...are just two things that have happened since my last post :) Holly went away on a school trip to Wales for four nights ,a couple of weeks ago.After a very tearful farewell on the Monday morning I spent the week worrying about her,until we got letters from her on the Thursday telling us that the journey had been fine (she was worried about getting travel sick on the way:( )and that she was enjoying herself :) She returned on Friday evening with a heap of stinky damp washing and was out like a light at bedtime!


While Holly was away Em turned 15 ...yikes! It was a bit weird not having Holly here and Em got a bit teary at one point, but she had a good day :) This weekend just gone she had her party here at home.It's become a bit of a tradition the last few years,they have pizza,watch a bit of X Factor ,have a dance / sing a long before the doughnut game :) 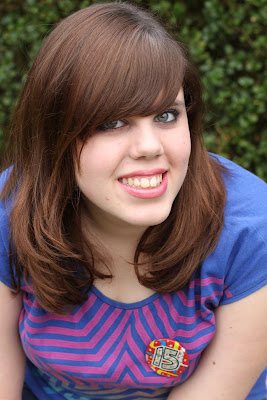 A couple of weeks ago I went to the crop and did some scrapping :) I rarely seem to get any done at home these days so I really enjoy my one Sunday a month catching up :) Sadly our numbers are a bit low at the moment but I am hoping we can keep going next year.So if you know anyone who would like to join us in Southoe ,give me a shout !
Posted by suebaru at 1:20 PM 1 comment:

...leaf throwing photos in my opinion :) I have lots of Holly doing this, but she is often pulling all manner of strange faces! She tends to shut her eyes and screw her face up when the leaves fall back down incase any bits go in her eyes (so she's being quite sensible really!) The weather continued to be gorgeous last Monday so we went back up to Ayot to try for some photos with her eyes open :) Bingo :) The light was beautiful up there,I love the glow of the leaves on the ground :) 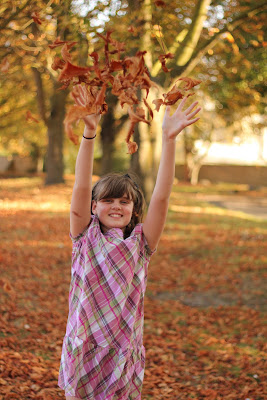 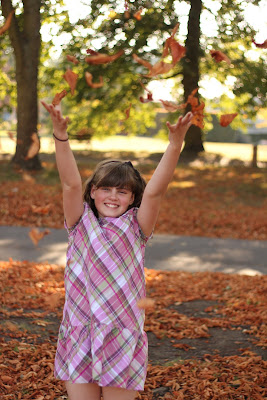 After the heatwave of last week,it has turned much chillier in the last few days. This means I am having a slight wardrobe problem....nothing fits! No, not because I have grown in size,but the opposite :) Since January I have lost just over 2 stone :) And all my warm clothes are too big :( And I can't find any new clothes in the shops that I like either :( A trip to a huge Primark is needed I think!On the upside,today I am wearing a skirt I haven't worn in two years so I can't complain really :)
This weekend we are packing Holly's case as she is off to Wales on a school trip on Monday.Four nights away seems like a very long time,I am going to miss her a lot :(But I am sure she'll have fun quad biking,doing archery and all sorts of other things!
Posted by suebaru at 5:32 AM 1 comment:

Pumpkins and a heatwave...

...yep, a pretty strange combination !
Since last week we have been having a heatwave here in the UK :) Tomorrow will be October the 2nd and the temp will be 25 degrees....mad! But it has been nice to be able to trust a weather report as they have all been saying the same thing !
So today we went to the pumpkin field...yes,I know it probably seems too early but there is a method to my madness,honestly! The place we go is not a pick your own pumpkin place.They grow them and then harvest them to sell in their farm shop. A couple of years ago we went just at the right time,they were harvesting them so they were in lots of convenient piles around the field. Last year when we went, they had finished harvesting them and there were just a few squashy ones left :( So this year I planned ahead and rang them last week to ask if the pumpkins were still in the field and when they would be harvesting them (and could I come and take photos!) All was well, they were still in the field and would be picking them sometime in the next couple of weeks :) So off we went today in search of pumpkins.On the hottest 1st of October,ever. Due to the crop rotation, the pumpkins were not just down the road from the farm shop as they have been before but instead were about a mile and a half up the road ! The very nice farmer offered to show us the way,so off we went following his landrover :) Now in reality,taking photos in a un-harvested,un-trampled pumpkin field is a bit of a nightmare! Add to that boiling hot sunshine and you get the picture! I did get a few nice photos .But I don't think I will ever get any I love as much the ones from two years ago,so maybe I should give up trying?! 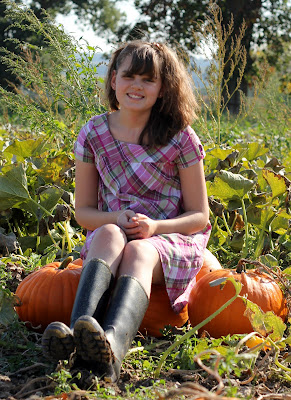 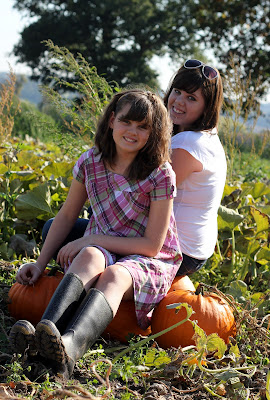 And this afternoon,in total contrast to the weather we are having I took Holly shopping to buy her waterproof trousers and a new waterproof coat for her school trip next week!
Posted by suebaru at 2:59 PM 1 comment: