It's a couple of weeks now since I went to see Singin' In The Rain but I would definitely recommend it as a great night out :)It wasn't high on my list of 'must see's' and I really only booked it as I had to find something to go and see while Em was at We Will Rock You and the tickets were on offer! But it was a great show ,just happy and feel good :)After dropping Em off at the theatre where she was going with a friend,my Friend and I went for a little wander round Primark and then headed to Pizza Hut for tea -yum! The weather was really miserable which was a shame as there were lots of lovely lanterns and decorations up for the Chinese New Year,it was just too cold and wet to stop and take photos! 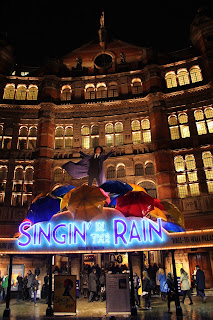 After the show we went to meet Em so she do stage door and meet another of her stage 'idols',Oliver Thompsett :) He was very lovely (my friend was very taken with him!) but sadly in the photo of us with him we both look like we have several chins so it's staying under wraps!
It is still freezing cold here and I have almost forgotten what sunshine looks like :( !
Last weekend Holly found out she had won the Design A Logo competition at Guides for a fund raising campaign and she won a prize :)She is also really excited that her form tutor is letting her run a cake sale in aid of Comic Relief on Red Nose Day :)
Last night Em and I finally went to see Les Miserables at the cinema.It was so so good but we got through a lot of tissues! I even gave one to the lady sitting next to me as she was crying and sniffing but couldn't find any tissues in her bag!
I don't have any scrapping to share :( I did meet up with Lyzzy and Caz at Stamperama at the weekend though and bought some lovely bits from the MDF man to decorate so I am feeling a bit inspired to go and make something!
Posted by suebaru at 6:51 AM 9 comments:

Final one for now :)

This is my last layout for now,until I get the urge again! This one is done using Cosmo Cricket social Club papers which I bought nearly two years ago! I also used some really old brads and some even older Heidi Swapp photo corners for the pointy triangles.And the flowers are by Chatterbox,again years old! 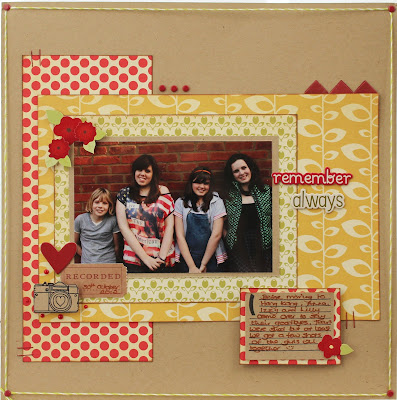 Love this photo of all the girls,taken when we said our farewells :( !
I haven't been up to much else really and I can't remember the last time I used my proper camera although I am still aiming for a photo a day on Instagram :)
Looking forward to Friday night as I am off to see Singin' In The Rain plus a bit of Primark shopping and tea beforehand hopefully :)

Posted by suebaru at 7:01 AM No comments:

This is the first layout I did last week :) Even though I seem to have bought lots of Christmas papers in the past I rarely use them,I think I have done about one Christmas layout before this one! Probably because most of my photos at Christmas are generally a bit rubbish with bad lighting and lots of blurred present unwrapping! I used papers and stickers from the Echo Park Holly Jolly range which I bought in the sales last January! Looking at it now ,the layout does look a bit plain but I'm not sure what else to add to it !
I did another layout last night,again using old papers and embellishments.Whilst I'm feeling slightly proud,I hardly think three layouts have made much a dent in my paper pile :( !

Posted by suebaru at 9:45 AM No comments:

I know it's been ages again!
We have spent the last week shivering under a blanket of snow and ice until this morning when practically every bit has gone...except for the stumpy remains of our snowman! I do love the snow but the ice covered pavements have been an absolute nightmare,and I'm surprised I haven't broken any bones this week!
Last week we went to see Shrek the musical :) It had been snowing heavily all day so when it looked like they might start cancelling trains we decided to get an earlier train into London.The snow in London itself wasn't actually that bad,just as well as we had a a bit of time to kill before we were due at the theatre!We wandered round Covent Garden and Leicester Square and tea in McDonalds before going to the theatre and waiting in the foyer where it was nice and warm :) The show itself was really good but it was totally spoilt for me by the people sitting along from us :( They talked loudly ,slurped,kicked seats,slept ,crunched ,fidgeted and rustled the whole way through which was totally distracting :( The evening was topped off with a drunk girl on the train being sick...delightful! I'm glad we went as Holly loved it and the show has its good parts but I have had better nights out! Looking forward to a far more civilised night out in a couple of weeks when I go to see Singing In The Rain while Em goes to We Will Rock You with a friend :) 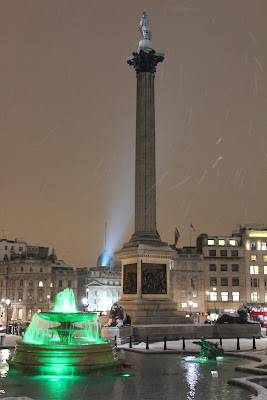 We went out in the snow quite a bit and even Em made an appearance when her mates knocked for her :) 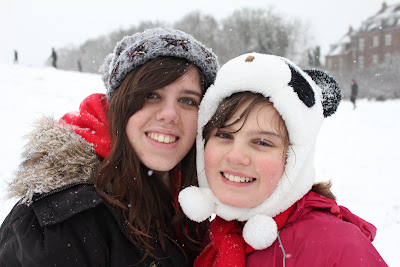 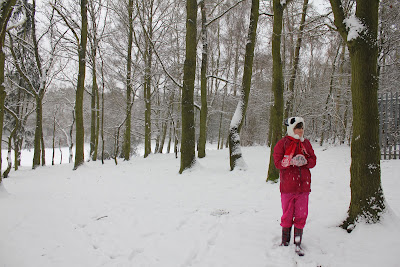 I have also done a couple of Lo's this week :) This is one of them,using one of the photos that Anna took last September :) 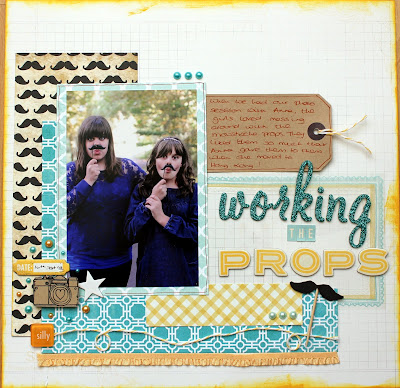 I used all MME papers ,except for the moustache paper which is by Echo Park.It also includes possibly the naffest hand made embellishment ever, the little moustache on a stick! 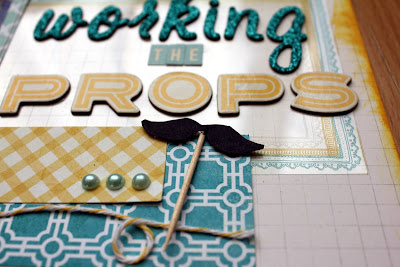 I will post the other one later this week :)

I'm sure I've said it before but I don't really get that excited about New Year . Though I would love to be in London for the fireworks one year! We sat up and watched them on TV with the girls and went to bed not long after! 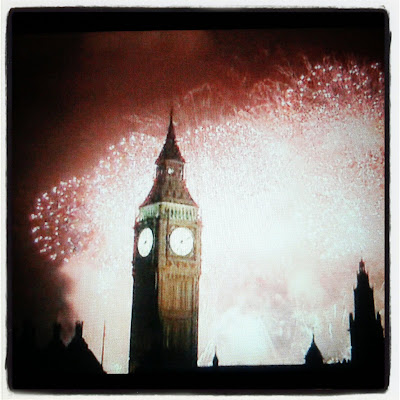 I have been back at work this week and it has dragged so much :( Roll on having a lie in tomorrow! We didn't have time to take the decs down on New Years Day,so that's tomorrows main job,I've spent this afternoon taking down all the lights and tinsel,dusting and re-arranging the shelves back to normal :)
I think I have come up with a plan for scrapping a 2013 album :) Much as I like looking at peoples's Project Life pages I really don't think it's for me and I would never keep up with it.Instead I have decided to stick with the Document style album I have attempted before,but I have ordered some Simple Stories Sn@p! supplies. This way everything is pretty much done,I just need to add the photos and journalling...we shall see! At least if I don't stick with it ,I won't have wasted loads of money as I have bought the bare minimum and I'm sure I have a million and one page protectors hiding in a cupboard somewhere!

Posted by suebaru at 7:59 AM No comments:

Here are a few photos of the mini book I mentioned in yesterday's post :) I used a basic Papermania chipboard book from the Range and used all My Minds Eye papers :) I kept it very simple ,just adding flowers and pearls to each page . 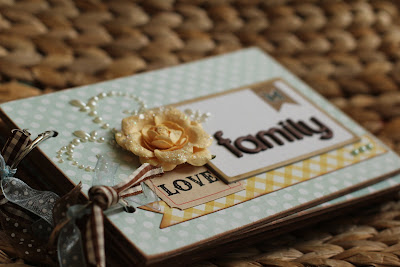 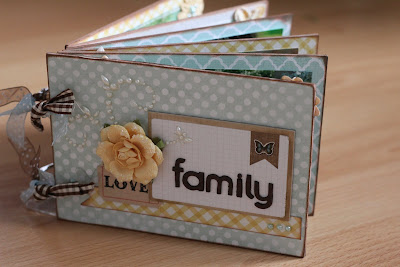 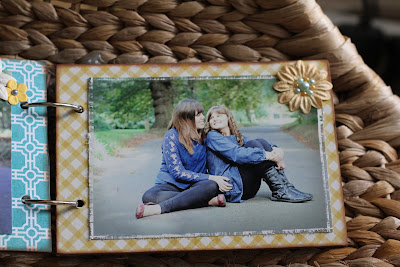 . I really enjoyed making this and I found it really easy using just a few sheets from one range .I stared a similar book but slightly larger,for my favourite Autumn phottos from last year ,so I think that will be next on my to do' list :)
Deb, I have requested to follow you on Instagram :) Thanks for your comment,I was just wondering about you the other day!
Posted by suebaru at 7:53 AM No comments:

I'm not sure why I've been putting blogging as I have missed it. And I find it really sad that so many blogs that I used to love reading for scrapping inspiration or just general nosey-ness are no longer updated or closed to univited readers :( The blogs I seem to spend the most time browsing these days serm to be nail polish related as there are so many. Yep,nail polish is my other expensive 'hobby'! Though you probably won't see photos of my nails on here as I don't class myself as any where near that good! Anyway,at least my blogging was better this year than last year so maybe with the new year approaching I may get the bug again:-)
Since I last blogged Holly has had her birthday, both girls took part in the school winter concert and were fabulous,Holly had her first secondary school parents evening which made us very proud,Em has got herself a part in a production at the local theatre,we went to see Em as Tinkerbell in her stage school performance of Peter Pan,we saw the John Lewis snowman in store 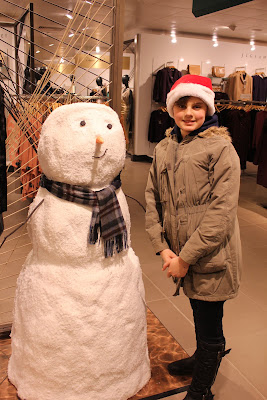 and I have just about got over the trauma of Anna moving :-) Oh and Christmas has been and gone!
I got a new phone at the end of the year and decided that with the help of Instagram that this would be the year that I did a December journal/album. All was going well until my new phone took a dive down the toilet and refused to be revived :( I now have a replacement phone so hopefully I will finish the journal in January.
I made an album of images from our photo shoot with Anna as a Christmas present for my sister in law and really enjoyed it so I'm hoping to make some more mini albums next year. Really not sure what to do about a yearly album for next year.I want to do something but have failed miserably at completing the last two years albums :( !
I hope to back soon and thank you if you have stopped by to read this :-)
Posted by suebaru at 2:17 PM 2 comments: